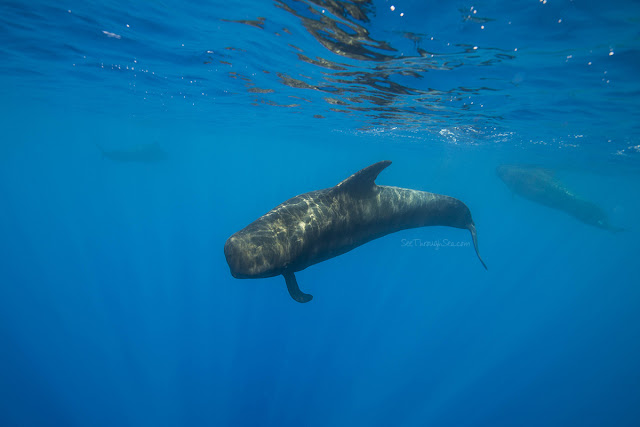 April 2nd started off like any other day, Jim and I got out on the water early to see what we could find. Shortly after leaving the harbor mouth we tracked a wind line. As the ocean tends to do, it delivered us a myriad of oddities as we passed, scooping up a coffee cup, a marker, a tattered bucket, a large bucket, and a vibrant orange buoy touting 87ft of coarse line.

We shot out about 15 miles offshore and arched south. I spied a disturbance at the surface and we came upon a pod of Pantropical Spotted Dolphins (Stenella attenuata) which we call "Kikos". The pod was actively hunting and we observed them from the boat for 10 minutes or so. Watching them collaboratively hunt is always such a treat, they dive and dart, pushing waves of water to corral their fishy prey. Our GPS blinked off with exhausted batteries, so we left the Kikos and headed back towards the now distant haze that was our island, blanketed in vog from Kilauea. 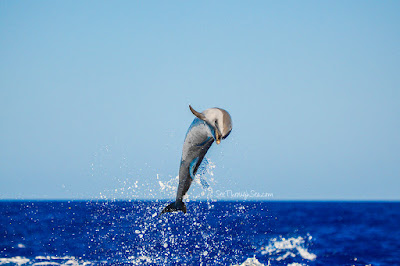 As we made our way back, we spotted a pod of logging Short Finned Pilot Whales (Globicephala macrorhynchus). The term "logging" generally describes a behavior in which the whales are floating, sedentary or moving at a very lethargic pace, at the surface. This display generally indicates that the pod has entered a "rest mode". As all dolphins and whales are conscious breathers, they cannot sleep as we do because they would stop breathing and suffocate; they have to think about breathing. Quite possibly one of the coolest things about cetaceans is that they can operate the two hemispheres of their brain separately. When they "sleep" what they're actually doing is resting one of their brain's hemispheres while keeping the other half alert to control breathing and to watch for predators. Dolphins and whales have a cross-ocular connection just like we do, so when they're resting their left hemisphere, the right eye closes and vice versa. You can tell which side of the brain they're resting by observing which eye they've got shut!

In hopes of filming this behavior so that we could share with our audiences how cetaceans sleep, Jim & I turned off our boat and very quietly slipped into the water. The water was slightly murky on the surface. We sat still and after several minutes passed by, the silhouettes of the large whales slowly appeared as they silently drifted in our direction. The group closest to us was comprised completely of males, the largest being the biggest Pilot Whale I've ever seen. He was approximately 20ft in length and had to have been several thousand pounds. He was flanked by equally robust but slightly smaller males and they came within about 15ft of us, as they continued slowly north.

As they passed along the surface, I noticed the male furthest from us stalled. He was awake and I could see his eye trained on us. Pilot Whales usually pay no attention to us, so the fact that this male appeared to be looking at us raised the first flag. I glanced back to see that Jim was by our boat and we were about 15ft apart, so I started to slowly swim backwards in his direction without turning away from the whale. As I did, the whale turned to face me head on. What happened next unfolded within  seconds- The whale swam rapidly in our direction along the surface, blowing bubbles and vocalizing as he swiftly approached. I gave a few last kicks and had my back against the bow of our boat. He was ten feet from me when he angled low and I tucked my legs up to avoid contact. He exposed his genitals and whipped his tail in our direction, then he dropped to about 15ft, resurfaced, looked back at us once more and swam back towards his pod.

To me, this was a clear "get away" sign. In the decade that I've worked with wild Pilot Whales, I've never had an encounter like this. It appeared to me that this particular individual was  uncomfortable with our presence. We immediately got out of the water and, after discussing it with Jim, I realized that behavior like this could be easily misconstrued as playful by people who aren't aware of "normal" Pilot Whale behavior. Bubble blowing and high pitched squeaking can appear "cute" and "friendly" when in reality, they can be signs of aggression. There have been two known incidents of wild Pilot Whales dragging humans underwater by their legs. It's difficult to know if their intentions are playful or aggressive, and humans often make the mistake of anthropomorphizing or misinterpreting the intentions of the varied marine organisms they encounter. Although spending time with these animals provides us with an opportunity to learn, behavior displays like this could potentially be dangerous for both the humans and the animals involved and therefore should be avoided.

We can't definitively say why the animal behaved that way. Perhaps it has had a previous bad encounter with a human and responded to our presence as so; perhaps a female in the pod was about to give birth and we were considered a threat; perhaps he has a genetic predisposition to aggression; perhaps he was simply having a bad day; perhaps this behavior wasn't aggressive at all and the animal was simply curious about us - we can't say for sure.

It was a humbling experience and a reminder that, no matter how well we "know" these animals, we have no idea what is going through their minds and so we need to operate with respect and caution. This line of thinking should always be first and foremost on any waterman/waterwoman's mind when in the presence of wildlife. 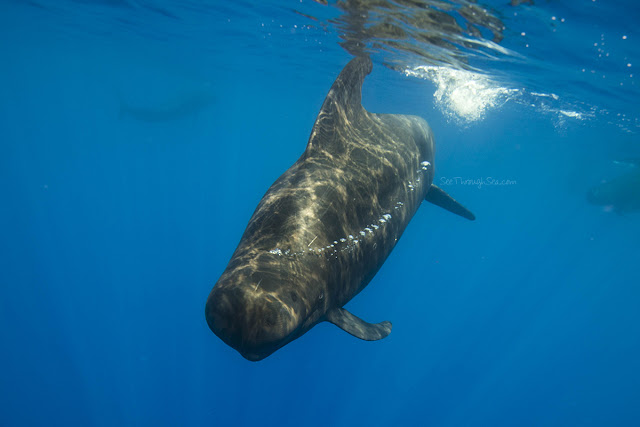 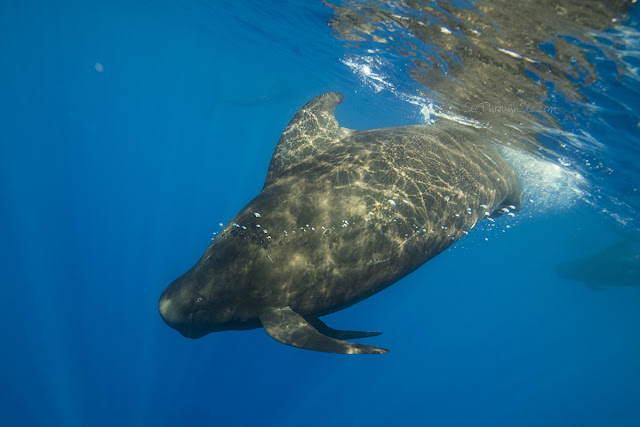 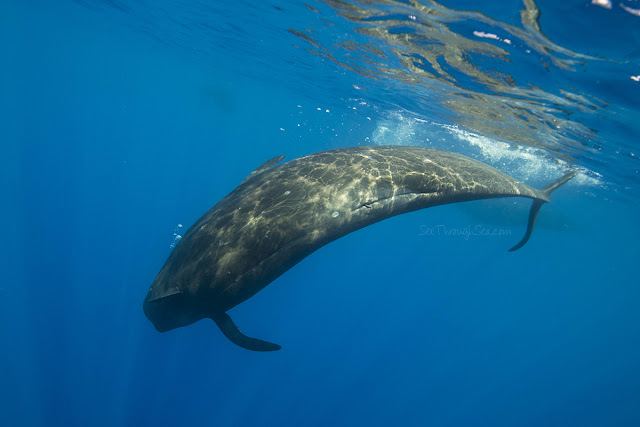 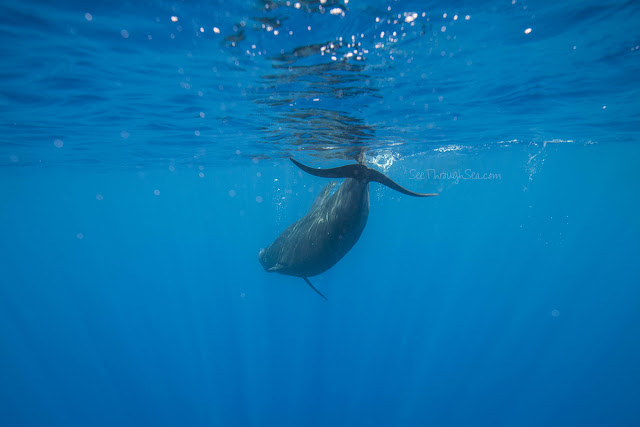 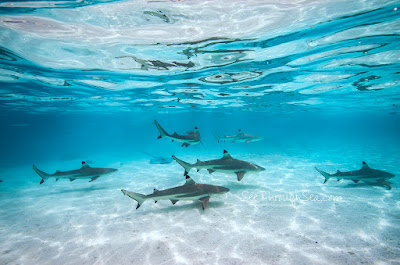 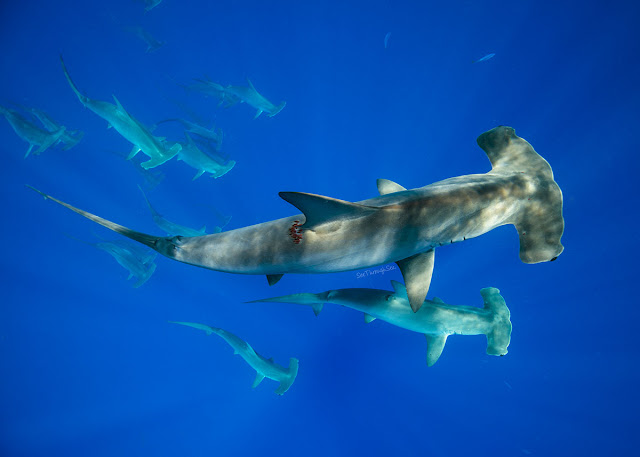